On our first full day in Iceland, we awoke refreshed and ready to go (thanks in part to falling asleep at 6pm the night before).

On Tuesday we had a full day of sightseeing planned. We signed up for the Hot Golden Circle and Secret Lagoon tour. It was wonderful! The tour was small which gave it a very personal feel. Our tour guide, Bjorn, was so knowledgeable and an all-around great guide. He gave us so much information about everything we saw. He even told us a scary story that Icelandic parents tell their kids, complete with voices for each character.

Our first stop of the day was Þingvellir National Park where we walked between the North American and Eurasian tectonic plates. (We came back on Thursday to snorkel between said plates). 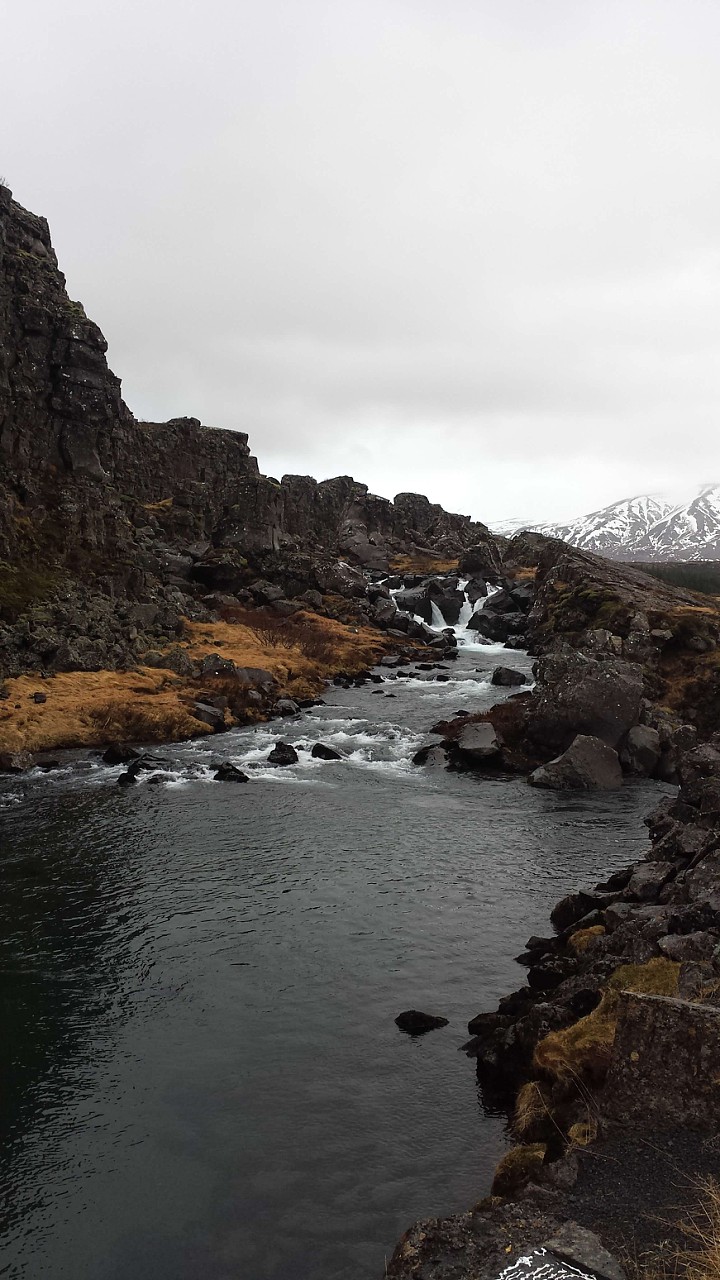 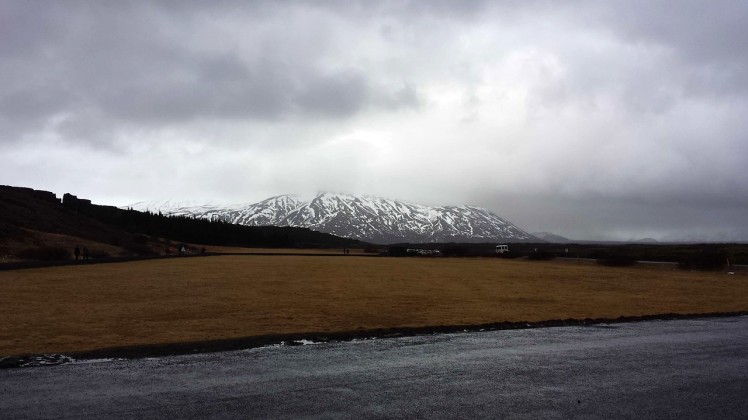 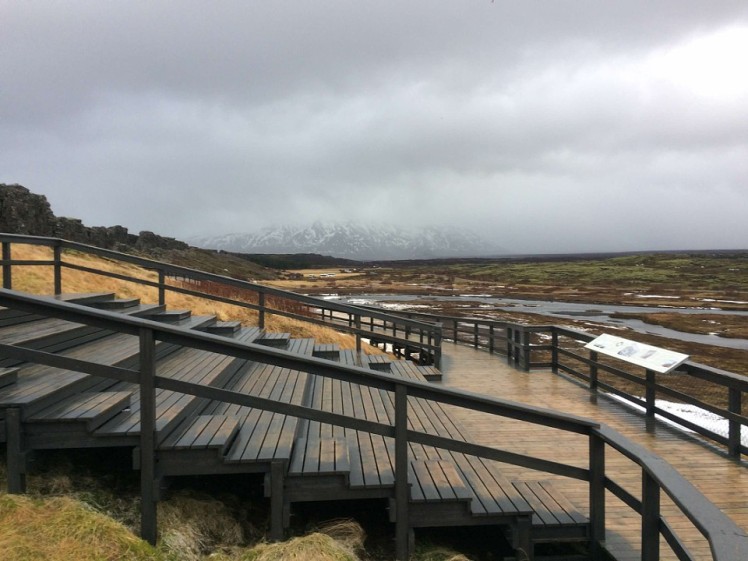 It was so cold! And also extremely rainy. And windy. And totally awesome. 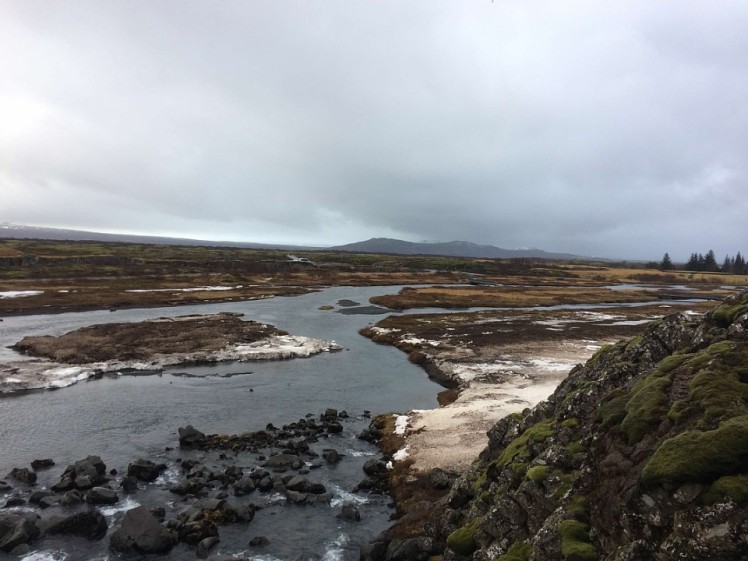 Next, Bjorn took us to a dairy farm. Turns out Icelanders are crazy about ice cream! So we helped ourselves to a few scoops of freshly made ice cream- right in front of the cows whose milk made our tasty treats possible.

Once we finished our treats, it was back on the bus to head over to the site of the first geyser known to modern Europeans. Geysir, the most famous of the geysers and where the word ‘geyser’ comes from, no longer erupts. Luckily for spectators, there are other geysers in the area that erupt regularly.

We took shelter from the cold (and the rain) and enjoyed some of the most delicious soup I’ve ever had. We ordered both the fish and meat soup. I had my doubts about it but the fish soup was phenomenal!

Once our stomachs were full it was back on the bus to our next stop: Gullfoss Waterfall. I’m obsessed with waterfalls and Gullfoss didn’t disappoint.

Next up was the Secret Lagoon. The Secret Lagoon is the oldest swimming pool in Iceland. Fun fact: Iceland is absolutely full of swimming pools. It sounds strange since it’s not exactly a tropical paradise but after getting in the water, I understood their obsession.

In order to enter the pool, and any other pool in Iceland, you’re required to shower naked and wash with soap in the open shower area of the (same sex) changing rooms beforehand. While it’s definitely not something most Americans are comfortable with, just roll with it. It may be uncomfortable but when in Rome/Iceland, respect their rules.

It started raining (again) when we were in the water. It was such a strange sensation to be submerged in warm water while being pelted by ice cold rain that felt like daggers.

Once our body temperatures had been raised by the geothermal water, it was back on the bus to continue home to Reykjavik. Bjorn recommended going to Messinn for dinner so that’s exactly where we headed. What should have only been a 15 minute walk from our hostel, turned into over an hour as we struggled to find our way through the unfamiliar streets in the seemingly unrelenting rain.

By the time we made it there, we were starving, freezing, wet… and in a great mood. After all, getting lost and wandering the streets of an unfamiliar city is only a bad experience if you let it be. Messinn was absolutely amazing! So amazing in fact, that we went again later in the week.

Our first full day in Iceland was a success! While the first day was a little rough between the jet lag and horseback riding, the second more than made up for it.

When you go to snap the view and are greeted with a close-up of your face. ➡️ 😂 •• I loved wandering around Neuschwanstein in the crisp fall air. Fun fact: the king was obsessed with medieval times so he had the castle built in that style but it was actually built in the 1860s. • • • • • #prettyinpiecestravel #travelblogger #passionpassport #insta_germany #travelblog #neuschwanstein #europeanroadtrip #sheisnotlost #wanderlust #wearetravelgirls #globalite #travel #iamtb #lonelyplanet #mountains #girlswhotravel #adventurethatislife #germany
Me, after realizing "eiskaffee" is German for "coffee with vanilla ice cream" and not an "iced coffee" like I originally thought. Best misunderstanding possible! •• If you're going to Germany, I can't recommend Rothenburg ob der Tauber enough. I fell in love with the quaint charm around every corner and would have gladly stayed there longer. I also highly recommend ordering an eiskaffee 😉 • • • • • #prettyinpiecestravel #travelblogger #passionpassport #insta_germany #travelblog #travel #iamtb #girlswhotravel #wearetravelgirls #globalite #lonelyplanet #europeanroadtrip #sheisnotlost #wanderlust #germany #rothenburgobdertauber #eiskaffee
Looking forward to continued adventures in the new year- and new passport stamps. • I'm also looking forward to posting more of the pictures I've taken instead of keeping them to myself because they aren't "good enough". I love the pictures I've taken because each one takes me back to a moment in time (good and bad). I started my blog as a creative outlet and as a way to help people plan the trip of their dreams. I've let the fear of what others might think hold me back. I'm determined to change that and get back to sharing my travels with you all. If you've made it this far, I guess what I'm trying to say is: happy new year. Here's to being the best version of ourselves beyond January 1st 🥂 • • • • • #newyear #venice #prettyinpiecestravel #travelblogger #passionpassport #visititaly #resolutions #adventurethatislife #globalite #lonelyplanet #iamtb #2020 #thisisultimate #realtalk #bucketlist #girlswhotravel #travelblog #wearetravelgirls #travel
Mozzafiato (adj): Italian; breathtaking, majestic, AKA the word I'd use to describe rounding a corner and being greeted with this view. • • • • • • • #nofilter #florence #firenze #prettyinpiecestravel #travelblogger #passionpassport #thisisultimate #girlswhotravel #iamtb #globalite #lonelyplanet #duomodifirenze #italy #wanderlust #latergram #insta_italy #takemetochurch
Since it's snowing in St Louis today, here's a throwback to warmer days in #Italy. Oh, and if you see lemon soda, do yourself a favor and buy a can. • • • • • • #cinqueterre #italiansummer #prettyinpiecestravel #travelblogger #passionpassport #girlswhotravel #sheisnotlost #wanderlust #italianriviera #iamtb #thewanderlisters #globalite #vernazza #couplestravel #thisisultimate
Without a doubt my favorite part of traveling is just taking in the sights. Not of extraordinary monuments of moments captured in time- just the ordinary every day things. To me, they're extraordinary. • • • • • • #prettyinpiecestravel #travelblogger #passionpassport #iamtb #girlswhotravel #globalite #lonelyplanet #thewanderlisters #wearetravelgirls #streetphotography #wanderlust #venice #cafe #venezia #italy #italiansummer #thisisultimate #color #flowers #igtravel #travel