My family decided we were long overdue for a good old-fashioned family vacation since we hadn’t been on one since.. well probably since before I started college. Once we determined this was in fact going to happen the reigns were handed over to me to plan. After a few scrapped ideas (including but not limited to Iceland and Curacao- because the two are sooo similar), we said ‘what the heck, let’s go on a cruise.’ And thus my research of cruise lines and their seemingly endless destination options began. Fast-forward a few weeks when we booked: an 8 Day Southern Caribbean Cruise through Carnival Cruise. To make my first cruise even more exciting, we were going to be spending Christmas in the Caribbean!

First up was St. Thomas, USVI. St. Thomas was a beautiful island that offered great snorkeling and a relatively easy walk from the port into the downtown area. At a sunny 80 degrees, we quickly forgot about the ice storm and single digit temps we left behind.

On Tuesday we spent the day at sea which was pretty much the worst thing ever for me since I (surprisingly) suffered from sea sickness. I was perfectly fine Sunday night but Monday night I went to bed early- like around 9 early because I just couldn’t handle it. Tuesday was even worse with no end in sight. The good news was I was able to buy sea sickness pills from the medical center. I paid over $3 for 4 little pills- and it was worth every cent. From then on I made sure to take one as we were setting off from each port. I still had to avoid walking around (especially towards the front of the ship) too much but they helped tremendously. We were also told (by numerous passengers) that this was by far the worst cruise they’d been on in terms of feeling every wave that came our way. Apparently our essentially 14 floor ship was “small” by cruise ship standards which contributed to the bumpy ride.

After a full day sailing we arrived at our next port of call: Barbados. Here I had booked surfing lessons for all of us! I was super excited since learning how to surf had been on my bucket list since I had made a bucket list.

Next up was St. Lucia. Unfortunately there wasn’t much to do in Castries (where we docked) and it also rained pretty heavily almost the entire time we were there. So much for my day at the pool. With the exception of a brief outing exploring the shops right off the dock, we stayed on board.

Oh, St. Kitts! I think this was my favorite island by far. It was so amazingly beautiful I was speechless pretty much the whole time spent exploring this gorgeous place. St. Kitts is definitely an island I need to go back to someday.

St. Maarten was a quirky little island. What made it quirky you ask? Well the fact that there’s a small little museum dedicated to movie props, specifically Star Wars, may have something to do with it. Yes, we went to the Yoda Guy Movie Museum Foundation during our short visit to the island.

Last but not least was another one of the US Virgin Islands- St. Croix. St. Croix was a great port in terms of walkability (some of the ports essentially required a taxi to get anywhere but St. Croix wasn’t one of them). Since we docked here on a Sunday that also happened to be Christmas day, a lot of the shops and restaurants were closed. Regardless, I still enjoyed exploring the streets and snapping pictures like my life depended on it. 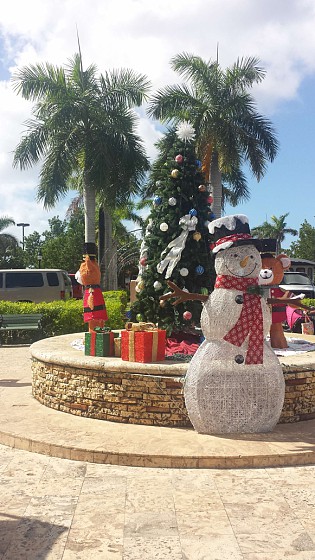 Our first excursion was Captain Nautica’s Ultimate Snorkel Expedition on St. Thomas which was amazing- and much needed since we had made it to the cruise ship but our luggage had not (and didn’t until late on Wednesday, but that’s a whole other story). We initially opted for two excursions through the cruise line and ended up with three when my name was selected as the winner for two free passes for the 4×4 Island Safari and Beach in St. Kitts. Our other originally planned excursion was City Clickers: Philipsburg at a Glance. This was essentially a photo scavenger hunt that pitted my family against the other family that was with us. It was a bit challenging since we were given a list of clues describing places of interest and/or significance in the capital city of an island we’d never been to before. Regardless, we all loved the excursions we ended up going on. If I could go back in time the only one that I might pass on would be the City Clickers one.. but that has more to do with my family than the excursion itself!

I booked our surfing trip myself since surfing wasn’t an offered activity and I had discovered in my countless hours spent researching that Barbados was one of the top islands in the Caribbean for surfing. It was exhausting but an absolute blast!

All in all I don’t think I would call myself a “cruise person” but I did think it was a great way to see a little bit of a lot of different places without the expense of navigating to and finding accommodations on each one. If nothing else, I now have a few destinations to add to my “Places I Need to Go Back To” list- and I can happily cross “Learn How to Surf” off of my bucket list.

3 thoughts on “That Time I… Went on a Cruise”